So many historically based picture books now focus on lesser-known events or individuals. When those books fill in gaps of knowledge and connect to other events that we do know, they can broaden students’ understanding of a moment in time or historical figure. The Teachers March! How Selma’s Teachers Changed History is a book that may help do just that. Not only may it show students another aspect of what was happening in Selma in 1965. It can also add depth of understanding to the Civil Rights Movement. 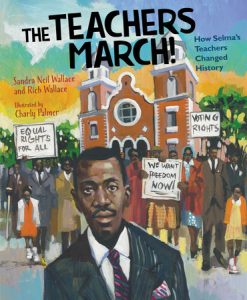 Often before I start searching for primary sources, I look for key people, events, or places mentioned in the book. Essentially, I’m looking for the search terms that will guide me when I dive into a database of historical items. In this picture book about the Teachers’ March of 1965, there were many.

If students are searching for their own primary sources related to a piece of literature, using a picture book can be great practice. I like to read the book one time to take in the story. My second reading is targeted at search terms. Locations like Selma, where this story takes place, would be one term. Reverend F.D. Reese, the teacher who organized the march, would be another. Coach Lawrence Huggins, a participant in the march, was added to my list. Finally, I added Sheriff Jim Clark who had conflicts with Reese before, during, and after the march.

Dr. Martin Luther King Jr., even though mentioned throughout the book, would not be a search term for me. His actions are so numerous throughout recorded history that sifting through them for connections to this specific story would be difficult. A mention of a specific speech or action within the story may target a search though.

My definition of a primary source is an item directly connected to the item under study and the related time period. In this case, the memory of the event still falls under that definition. That doesn’t mean that the individuals giving the interviews have a complete recollection of the event. Those recollections are not only impacted by time though. Perspective as well as other elements can play a role in how those memories are told. 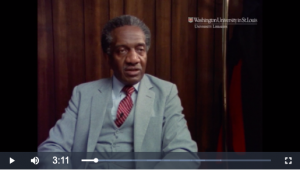 Eyes on the Prize; Interview with Frederick Reese

Two valuable primary sources I found were through the American Archive of Public Broadcasting. They hold raw footage of interviews used for public television documentaries. This included interviews for the Eyes on the Prize documentary released between 1987 and 1990. While the documentary is valuable, I find the raw interviews even more beneficial. Hearing the questions posed as well as additional footage gives a more full view of the source.

These two sources, interviews with Reverend Reese and Sheriff Clark, are in stark contrast with each other on certain points. Students with more experience with analyzing primary source video may be able to identify conflicting points of view as well as identify the topics. Students just starting to analyze video may be more successful if they have a common topic and identify the perspective of each person. 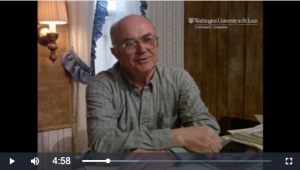 Eyes on the Prize; Interview with James G. Clark

Ask students, “How do these two interviews agree or disagree with the story told in the picture book?” Students may identify details in the interviews not shared in the story. Many will also likely recognize that Clark is giving an account that is not omitted from the picture book story but is in contrast to it. One example is his belief that many teachers were forced to march but did not choose to.

Ask students how statements in conflict can be resolved. Of course, reverting to the picture book is an option. Some students may suggest being able to speak to others who were there would help confirm one story over another. My curated set of primary sources hold interviews from others connected to the Teachers’ March. Other sources such as statements or interviews in news stories may also be considered.

After collecting primary and secondary sources, students can return to the topics identified or given in the two original source interviews. Ask students:

Giving the students an opportunity to address conflicting information in sources with more analysis and research can be helpful. Using The Teachers March! along with accompanying primary sources has an added benefit. It shows them a path that is supported by evidence while also broadening their understanding of the Civil Rights Movement.