We, as school librarians, are often called the Inquiry Specialists. During library school, I (jmf) embraced this identity; however, I had a narrow definition of inquiry. Back then, I focused my attention on teaching students how to research and find information. When I joined the faculty of an International Baccalaureate (IB) Primary Years Program in a public school, I realized there were so many other inquiry skills that I could help students build. According to the IB, inquiry is:

My identity as an Inquiry Specialist evolved, as I began incorporating these activities and practices into my K-5 library curricula. I often begin class sessions with a “See-Think-Wonder” activity which builds on the inquiry strand of exploring, wondering, and questioning (Ritchhart, Church, & Morrison, 2011).

This is how it works…

Share an image with students. I (jmf) often post a gallery of images and have students walk through the gallery. This sounds pretty fancy, but it typically means that I post images up in difference places in my school library. Below is one image from a collection I’ve used in a gallery walk (for a Cold War unit). The other images I use are at the bottom of our blog post. 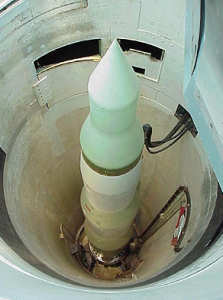 Around the image(s), students write on Post-It notes what they SEE in the image. In other words, students summarize the facts of the image. Using the above image as the example, students might write something like: I see a turquoise missile this appears open and ready for war; This looks like a weapon of mass destruction; or This looks like something that should be top secret. Sometimes students will have very little context for an image, and this is not a right or a wrong activity.

In another color of Post-It notes, students write what they THINK about the image. Often times I have students write the “I think” phrase, just to get them started on their second round of Post-It notes. This step provides an opportunity for students to consider the facts they just articulated in the first step, and then to process their own thinking related to the image. This moves students from the summarizing stage to writing personal response and sometimes even analysis. Using the image above, students often write something like: I think this looks like there’s a war going on; or I think we as a nation are giving up on peace; or I think this cost a lot of money and took a lot of time to create.

In the next step, students articulate questions they have about the image. While some educators have students write the phrase “I wonder…” I try to get students to articulate actual questions related to the image. Here are some sample questions students might come up with using the above image: Why did we hate Russia so much? Did Americans hate Russia or did just the governments hate each other? Where were these missiles? What type of damage could these missiles create?

These questions not only can set students on a path to inquiry and discovery about the Cold War, they also provide us with examples for discussing things like “thick” and “thin” questions and the contexts for pursuing both.

As you look forward to your upcoming inquiry units, can you utilize the “See-Think-Wonder” strategy? Or can you customize it for your own purposes? If you do, I hope you’ll be in touch and let us know what it looked like and how it went!

If you don’t know much about the Cold War or the Minuteman Missile National Historic Site…Starting almost immediately after World War II and continuing for the better part of five decades, the Unites States and the former Union of Soviet Socialist Republics (U.S.S.R.) were unable to resolve and accept the political and economic differences between their nations.  Exacerbated by national security concerns in a post-World War II era, these former allies jockeyed for position on the World supremacy stage, engaged in proxy wars in Korea, Vietnam, and Afghanistan, and tried to outdo each other’s achievements in their respective space programs.

Competition and desire for both supremacy and security inevitably bred distrust and the divisive practice of committing massive national resources to propaganda efforts and espionage on both sides. The distrust and fear between a typical Soviet citizen and an American citizen was profound, but largely based on a stereotypical straw man, as most American citizens had never known a Soviet citizen, and vice versa.

The fear and distrust between people and nations became so profound that those in the respective militaries and the ruling/political class chose to aim thousands upon thousands of Intercontinental Ballistic Missiles (ICBM) that were armed with nuclear warheads at each other.  This period of 20th Century history was called The Cold War.

Most of these missiles were contained within the geographical boundaries of these two nations, and most came to be hidden from view of the naked eye and satellite surveillance. It was a common practice to bury the ICBMs in a missile launch site, typically called a silo, under the Earth’s surface, with the entrance camouflaged in some manner.

One such missile silo, hidden away under a grassy hillside on the plains of South Dakota, is open for visitation and today called Minuteman Missile National Historic Site. Descending into the Delta-09 Missile Silo, one is transported to an extraordinary place in human history – a location where a single human being stood ready, buried deep within the Earth, to follow orders to not only launch a missile that would kill many hundreds of thousands of other human beings, but would most assuredly ignite a Global, Thermo-nuclear War that could very well end most forms of life on the planet, if not the planet itself.

This is what it had all come to, in the mad, ever-escalating response to differences, perceived and real, between nation states. In fact, the name they came up with to describe why this was such a good way to deal with our difference was MAD, or Mutually Assured Destruction.  The way they story went was that if both sides had the ability to blow up the planet and each other say, 100 times over, then we could all be certain that we would live in “peace” through this “war” footing approach. Voilà. Peace. Hmmm…

In fact, the entry page on the park service web site perpetuates this dubious assertion in their title “Deterring War, Preserving Peace” (http://www.nps.gov/mimi/index.htm). Really?  Deterring war? By making nuclear bombs and arming them and getting them ready to fire?  Preserving peace?  Seriously?  Remembering the profound fear I (VN) walked around under as a child, fear instilled in me by adults who told me to fear people I did not know and had never met, fear that led me to cower under my desk in elementary school during air raid “duck and cover” drills that encouraged me to practice a farcical exercise that would make me safe on the day the bombs began to fall, the day the Soviets began to kill me. I was a child. None of this response preserved or created peace within me or anyone. It fanned the flames of fear and downright dislike of these people on the other side of the world who could well begin to kill me one morning after the bell rang for homeroom. It seemed to me that the World had gone completely mad and none of this made me feel more peaceful.

Mutually assured destruction was the best all the grownups could do it seems, instead of say…mutually assured respect, or mutually assured co-existence or cooperation, or better yet mutually assured food and cultural trades and exchanges. Then we would all have learned the truth about how the average citizen of South Dakota and the average citizen in St. Petersburg were not so different, after all. That, as President John F. Kennedy put it so well, “Our most basic common link is that we all inhabit this planet. We all breathe the same air. We all cherish our children’s future. And we are all mortal.”

Themes and stories of duty, protection, vigilance, and skill are there to be interpreted and explored at this park site, as is what the site represents and how it fits into the historical time when it was operational. But to me (VN), the strongest sense I got when I descended into the silo, was just how far gone the whole world seemed to be to allow it to get this far. To me, the lessons were more about how it is important to not believe stereotypes and other efforts to vilify entire groups of people and nations, just because they think, look, act or believe differently than we do. How we must wisely ask ourselves what is the person gaining who is gossiping about and demeaning someone whom we have never met, outside of their presence, and without very much (or any) first-hand knowledge of them?

The thing I (VN) took away from Delta-09 Missile Silo was found in the echo of Kennedy’s words about how alike we all are, how entitled each truly are to get to try to enjoy the blessings of life, and how obligated we each are to be allowed to do so without our lives being taken away or diminished by threats, violence, and fear of death…at a minimum.

In the best sense, we would know each other, learn from each other, appreciate the different ways we each go about things, and find comfort in the places where we overlap, not distrust in the different flavors of human being that we each are. It is from these efforts that peace and understanding flows, not at the point of a missile that is “assuring” my “destruction.”

Or as the nuclear protesters of the era were known to say, “You cannot hug someone with nuclear arms.” 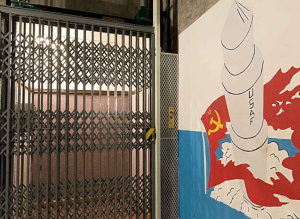 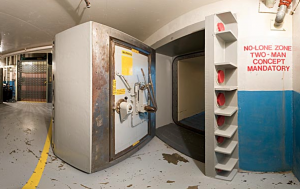 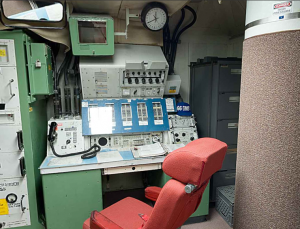 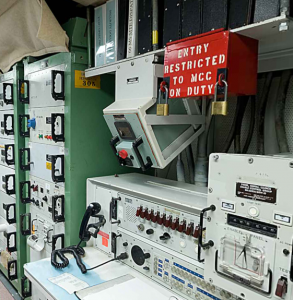 All images, unless otherwise stated, are property of the National Park Service. All images were taken at the Minuteman Missile National Historic Site.