Four years ago, we were approached by a district administrator, asking if we were interested in participating in a one-week song-writing residency focusing on Harriet Tubman, with the internationally known folk duo Magpie. We agreed it would be a worthwhile project to implement together. Harriet Tubman spent the second half of her life in our hometown of Auburn, NY, but unfortunately, many of our students and community members knew little about her, other than basic facts about her life as an enslaved person and work as an abolitionist. We felt this project could not only address this deficit, but incorporate project-based learning, an idea new to our district. Little did we know at the time where this project would take us, our students, and entire community!

After the first song was created (“Oh, Harriet”), we realized the benefits to our students and their families were numerous–student engagement; pride in our local history; and a unique way to learn using music that reached everyone, regardless of academic ability. We knew we wanted to work together on this project again. 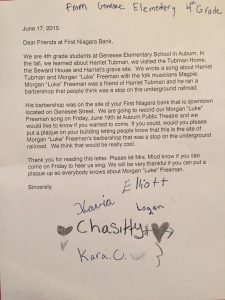 The second year brought even more benefits to our students. They learned about a man named Morgan “Luke” Freeman, who owned a barbershop in downtown Auburn that was a stop on the underground railroad. Freeman was a contemporary of Harriet Tubman’s, and with Magpie’s help, the students wrote a song about Tubman from Freeman’s perspective. This experience moved some of the students to action. The land where Freeman’s barber shop once stood is now a bank. The students wrote a letter to the bank, requesting a plaque recognizing Freeman’s contributions be installed on the wall of the bank building. In July of 2016, this plaque was purchased by the Harriet Tubman Boosters and installed at a public ceremony where students sang their song and spoke about their project. 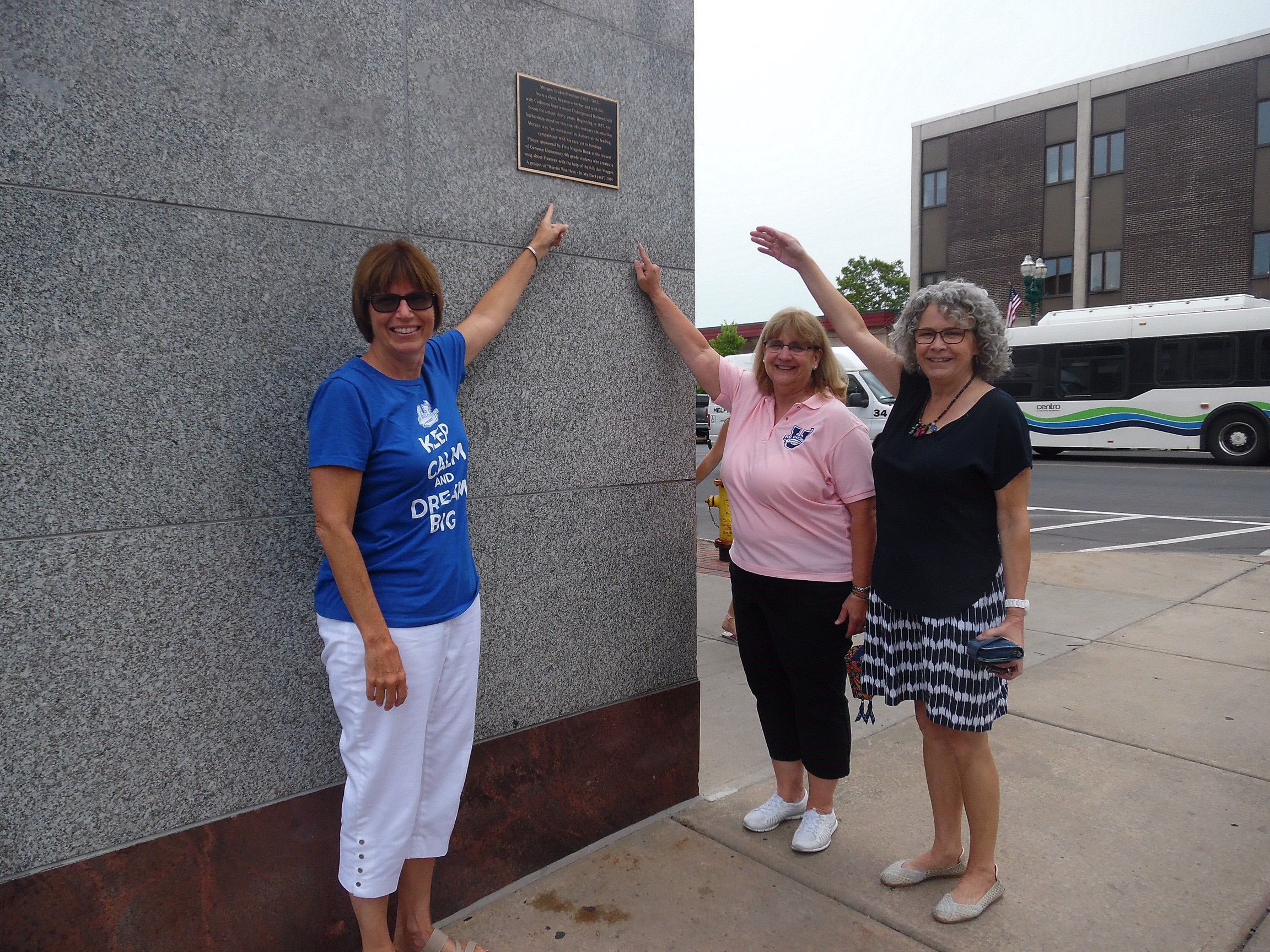 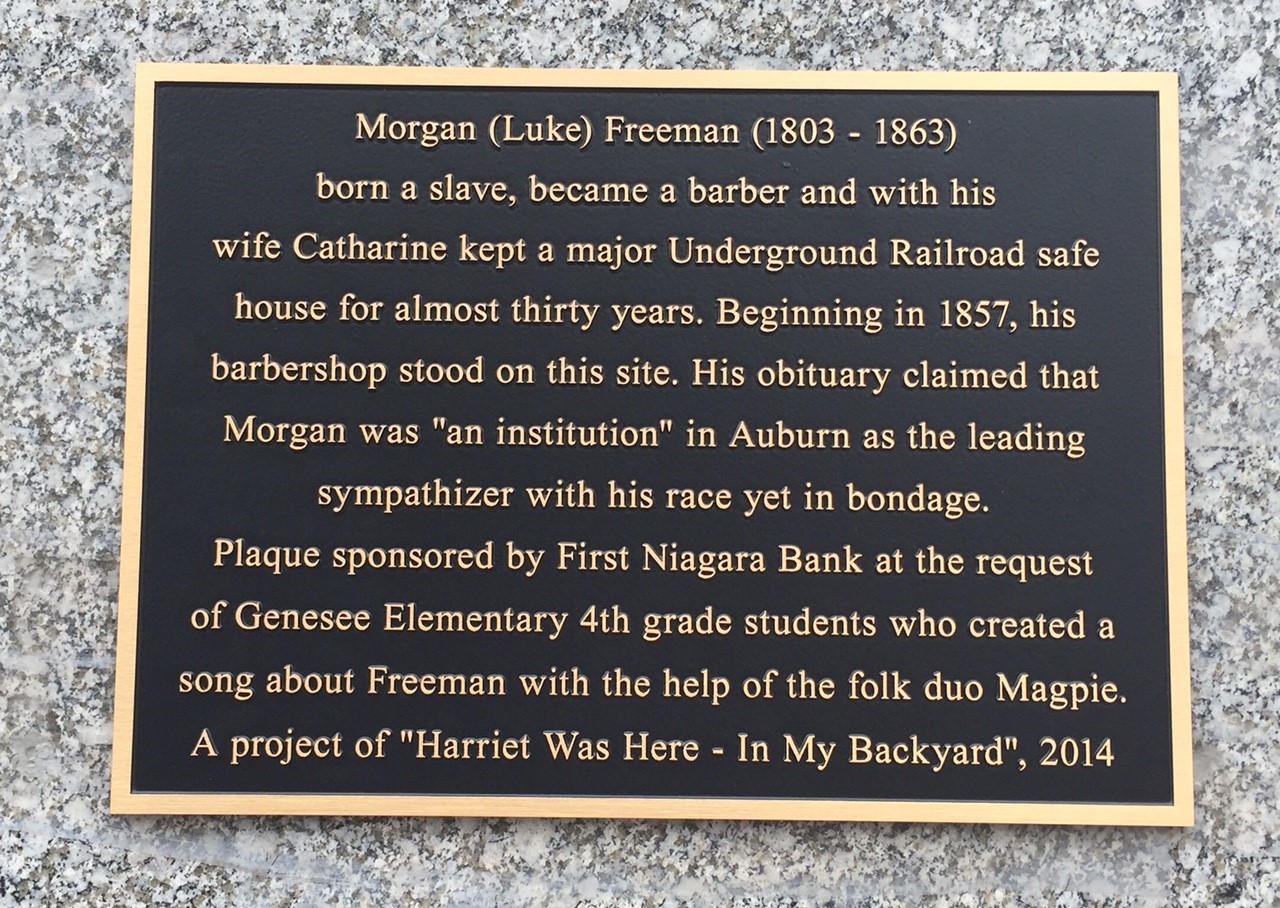 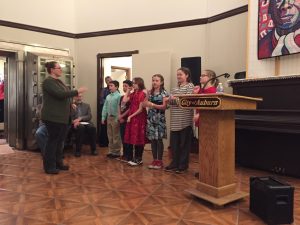 Year three focused on Harriet Tubman as an entrepreneur and the work she did to achieve her social justice goals. Once again, research, field trips, and a songwriting residency with Magpie led to the creation of a song called “Workin’ for Freedom.” Our community became aware of the songs our students were creating, and the students were invited to perform throughout the community. Over the past six months, they have performed at the kick-off ceremony for a fundraiser for a statue of Tubman in downtown Auburn, at the installation of a crocheted mural of Tubman on a local art museum, and during a city council meeting at which a proclamation honoring Tubman was read. Because of this, students and their families are visiting places in our community that they wouldn’t otherwise.

Our fourth year of implementing this project has just come to a close. This year’s song about Harriet Tubman (“Win the Vote”)  focuses on Tubman as a suffragist, which is appropriate considering this is the 100th anniversary of the establishment of voting rights for women in New York State. This year we had the students focus on the questions, “What did it take for women to be considered equal to men in New York State?” and “How did the abolitionist movement connect to the suffrage movement?”

Throughout this ongoing project, we have witnessed an increase in knowledge of and pride in Auburn’s rich history, not only in our 4th-grade students, but among our school and community. Students have developed confidence in public speaking and performing, and they are engaged in and empowered by the process of creating song lyrics based on their research. Students have also developed a heightened sense of social justice based on their research of Tubman’s life.

A fellow teacher suggested we apply for the Roald Dahl Miss Honey Social Justice Award. As we completed the application and reflected on our project we realized what an impact this experience has had on our entire community. The award has raised awareness in our district of the power of collaboration between librarians and classroom teachers, as well as the impact of project-based learning. The planning for next year’s project will begin on the plane ride to ALA in Chicago, where we look forward to gratefully accepting this award!

To listen to the songs created by the 4th-grade students with Magpie, go to http://libguides.cayboces.org/harriet.

Like Loading...
‹ Looking back to look ahead: planning for a new year
School Libraries Key to Whole Child Education in East Baton Rouge Parish School System ›