I spent time with my nephews this holiday. The oldest boy is 10, and he is starting to stretch both physically and mentally into the adult he will become. Seeing him reminds me of when I was his age, and I started mowing the lawn. The responsibility involved in running that dangerous, powerful machine thrilled me. But I was given the chance to do so only after a thorough series of instructions and demonstrations. Also, my dad supervised very carefully when I first took on the mantle of mowing. If I were to see my nephew try to run his family’s even-more-powerful mower on a whim, I would be appalled.

And yet, while we lazed about, I saw all three of the boys grab tablets and go to an online gaming environment. While I watched, I saw many of the other players engage in behaviors I considered rude at the least, and bullying at the worst. The language players used was inappropriate for the youngest, and certainly not a good model for the other two.

Their parents were quick to tell the boys that they weren’t playing that particular game anymore when I pointed it out. However, this was a regular staple of their digital diet before Uncle Fun-Buster came along. This got me thinking about kids and technology. 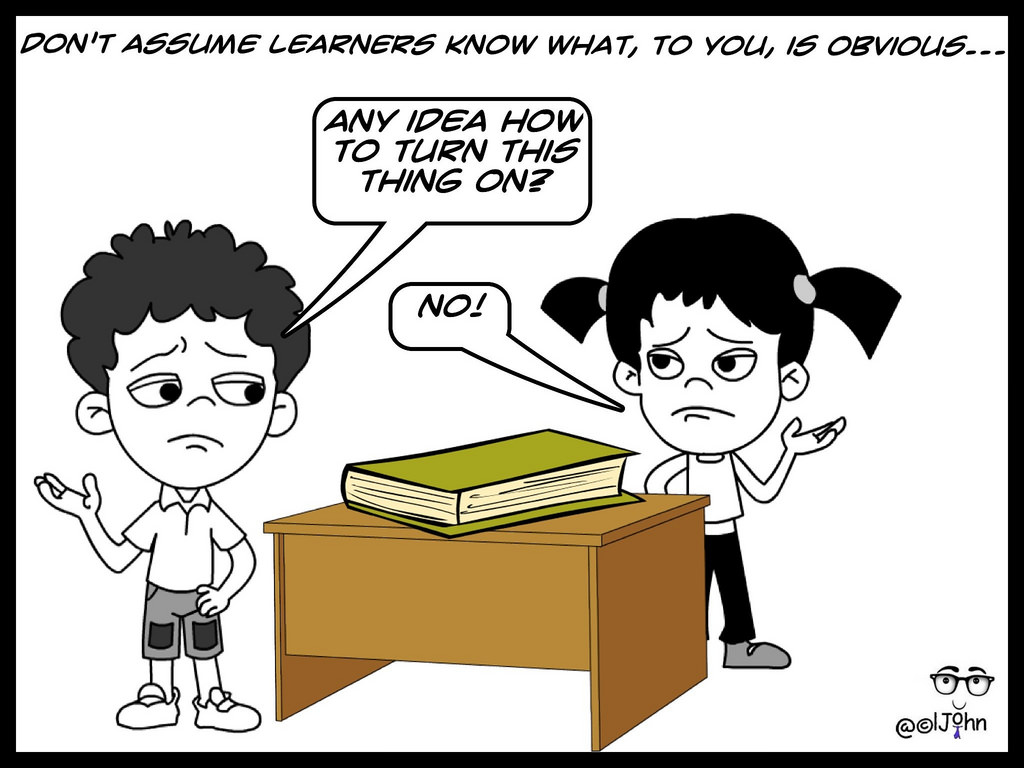 Alice Keeler, an educator and ed tech consultant, recently tweeted that educators often assume students know how to use Google effectively, which is not the case. I would generalize that out. We often assume kids can use technology effectively because we see them using technology and we make assumptions. But being able to access an online gaming platform or a social media site is not the same thing as understanding best practices in using those tools.

As educators, we know that being a teacher and doing education well are not always the same thing. Doing the latter requires training and feedback and experience. But for some reason, we often seem to forget that handing a kid a portal to the digital world and saying, “Use this well,” is not going to help students. And even when we give them the lessons, they still need ongoing guidance, and to practice, practice, practice until it’s “mental muscle memory.” We can’t expect students to just “do it right” after one lesson, which seems too often to be the default belief when working with kids and tech.

WE Are the Problem…

I find Alexandra Samuel’s “Yes, Smartphones are Destroying a Generation, But Not Of Kids” an excellent rebuttal to the idea that it’s digital tools that are hurting kids. She argues that what’s actually hurting kids is adults. We don’t give kids enough proper role modelling of online behavior. So why are we surprised when we find them getting all Lord of the Flies online?

Teachers serve as role models of how to dress, behave, and interact with others in the physical space of school. When we see or hear students behaving inappropriately, we flag that behavior and take steps to correct it. In this controlled environment, students quickly learn what is acceptable behavior and what is not. If they backslide, they are promptly corrected. We’ve been doing this for hundreds of years. But we’re NOT doing this in online environments.

…AND We Are the Solution!

While considering all of this, the old saying “Moderation in all things” came to me. This is wise counsel: to avoid overindulging. But I realized it should have a renaissance in the digital age, particularly in schools. Maybe it’s time to think about ways we can better model online behavior for students, and moderate their interactions. During field trips, we make sure students stay together and that none of them wander off alone and get themselves into a difficult spot. We also monitor their behavior and provide correction when necessary. And yet, in virtual space, we take very few of these precautions and provide little feedback and guidance.

We frequently allow kids unmonitored access to the Internet via their phones. Filters on school computers ostensibly keep students safe by keeping them from accessing certain sites. But who they’re there with, and how they are interacting, is often improperly moderated, or unmoderated. My nephews played a children’s game with automated moderation lax enough to let other players behave badly. That provides a poor mental model for users like my nephews of what an online environment “should” be like.

If the majority of the models of online behavior kids see are people being jerks, we can’t be surprised if they become jerks online, too. As the adults, and as the educators, it’s up to us to make sure that kids are learning the lessons that help them become the best versions of themselves. And it’s the role of the education system to help students become productive members of a democratic society. Whether they’re in our physical spaces or in virtual spaces, we owe it to students to provide them with appropriate guidance and feedback.

This is where school librarians can come to the fore. We can model good social media interactions through school- and library-focused accounts. Encouraging students to interact with these accounts can not only keep them abreast of goings-on in the school, but also help them see appropriate interactions.

Likewise, many school libraries encourage good problem-solving skills with gameplay of various types. Rarely, though, do we hear about online gaming in schools. Let’s change that. We can be on the front lines in online gaming environments, providing models that won’t get kids’ mouths washed out with soap.

What I’m proposing is not a simple thing, and it requires buy-in from a whole lot of stakeholders. So let’s help parents to see that giving kids unfettered access to the world also gives the world unfettered access to their kids. Perhaps they’ll be a little more willing to take part in moderating their children’s online worlds and modelling the behavior they want to see from their kids.

School librarians are uniquely positioned to raise this issue as something for faculty and administrators to consider. The school librarian is often central to considerations of software deployment and technology training for teachers and students. Perhaps it’s time we include in those lessons the importance of avoiding assumptions about students’ digital abilities and proclivities. Perhaps it’s time that we admit that important skills require more time to develop in students. Perhaps it’s time that we admit that teaching kids how to use technology well is one of those time-consuming but important lessons. And perhaps in schools it’s time we recognize the importance of “All things in moderation.”