As I read new young adult books this summer, I noticed a trend of re-imagined classics. While modern-day stories inspired by classics aren’t new, I can’t remember seeing so many of them at one time. Here are my reviews of three that I read. Like most recent “remixed” classics, all feature characters from underrepresented groups. 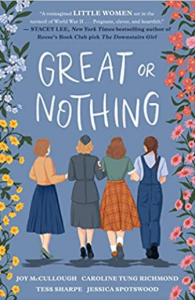 This re-imagined version of Little Women is set during WWII instead of during the Civil War. Following Beth’s death, the remaining three March sisters have a falling out and go their separate ways. Meg, a high school English teacher, remains in Concord with Marmee, who has thrown herself into volunteer work to the point that Meg rarely sees her. Jo is working at a munitions factory in Connecticut and living in a boarding house with several of the young women she works with. And, after lying about her age and identity, Amy is in London working as a Red Cross volunteer while her family thinks she’s studying art in Montreal.

Each sister narrates her story in alternating chapters, with Beth commenting in verse from beyond the grave. (It sounds creepy, but it actually does a nice job of providing continuity and tying subplots together.) Like the original, this is a story about sisterhood. However, it’s also a story about grief and how the anguish of losing a beloved family member (in the middle of war, no less) can turn a family upside down.

Although the setting is different from the original, this version of Little Women stays true to the spirit of the original story by exploring themes of family unity, integrity, hard work, and service to others. The gimmick of each sister’s story being written by a different author was a risk, but the personalities and actions of each of the March girls is consistent with the characters created by Louisa May Alcott. My only criticism is that one of the sisters’ stories ends on a bit of a cliffhanger while the other two stories are neatly wrapped up, making me wonder if there is a sequel planned.

Recommended for fans of historical fiction (especially the WWII period) and of the original Little Women. 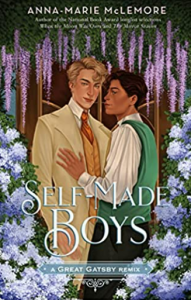 (Thank you to NetGalley for providing an ARC of this book.)

McLemore cleverly reimagines The Great Gatsby with LGBTQ and Latinx characters in a tale that is part historical fiction and part romance with a dash of mystery. Nick, a transgender Latino, leaves his home in Wisconsin to go to New York, where his cousin Daisy lives. Daisy, a young woman from a very modest background, is dating a wealthy young (white) man and is “passing” for white herself. Therefore, she introduces Nick as the son of her family’s maid. Although taken aback by Daisy’s lies, Nick keeps his cousin’s secrets.

Nick lives in a rented cottage next door to Jay Gatsby, a successful newcomer to the local social scene. When Jay invites Nick to a lavish party at his house, Nick discovers that Jay is also transgender. This creates a bond between the two young men, and soon Nick develops romantic feelings for Jay. However, Nick knows that Jay has feelings for Daisy, who is almost engaged to beau Tom Buchanan. Tom has the wealth Daisy desires, but his character is lacking, a fact that bothers Nick and Jay. They believe Daisy deserves someone better.

The mystery involves a $350,000 necklace that Daisy lost when she fell off a yacht. (Such a necklace would be worth over $5 million today — I looked it up.) She was intoxicated, of course, and doesn’t remember much about that night. Could Tom have pushed her overboard after removing the necklace from her neck? Nick thinks so. However, the insurance investigator thinks Nick had something to do with the necklace’s disappearance even though the incident on the yacht happened before Nick left Wisconsin.

There are a few minor problems with this story. For example, the use of the word “Ms.” to address Daisy on the first page threw me as this term was not used in the 1920s. Gatsby’s service in WWI strains credibility as the gender he was assigned at birth would have been hard to hide in the close quarters of the trenches. Finally, the book is a little slow in the middle where it gets bogged down in details of the glitz and glamor of the social scene.

Nevertheless, the novel captures much of the spirit of the original work while exploring the American Dream through a more modern lens, and there are several twists and turns that will keep readers engaged. 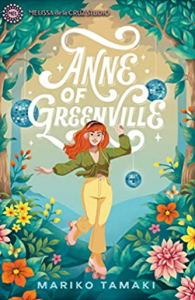 (Thank you to NetGalley for providing an ARC of this book.)

In this modern re-telling of Anne of Green Gables, Anne Shirley and her two moms (Millie and Lucy) move to the small town of Greenville when Lucy gets a job as assistant principal at Greenville High School. Though Anne, who is also gay, quickly finds a friend in Berry Blythe, others are not so welcoming. A small group of “forevers” (kids whose families have been in Greenville for generations) harass Anne by calling her names, spray-painting a hateful message on her front lawn, and pretty much physically assaulting her! Understandably, Anne loses her temper a time or two, but overall handles the harassment with grace — perhaps a little too much grace considering at least one of the incidents of harassment is a hate crime.

This book is billed as a re-imagining of Anne of Green Gables, but it doesn’t capture the spirit of the original. Green Gables Anne wants desperately to belong to someone because, orphaned as a baby, no one has ever wanted her since her parents (whom she doesn’t remember) died. When she arrives at Green Gables, Anne discovers that her adoptive parents (the Cuthberts) are expecting a boy who can help on the farm; the orphanage sent a girl by mistake. Nevertheless, the Cuthberts decide to keep her, though the decision is a reluctant one on Marilla Cuthbert’s part. Anne wants to please her new parents by being a proper young lady and wants to fit in with the other girls in town by wearing fashionable clothes (specifically pretty dresses with puffed sleeves). Yet, her quick temper and vivid imagination frequently get her into “scrapes.” Because the original work covers a period of five years, we see both the main character and the secondary characters develop, grow, and change over time.

Greenville Anne was orphaned at the age of three when American mother and Japanese father died. Adopted by a cousin (Millie) and her wife, Greenville Anne has always known love and security. Brimming with self-confidence, Greenville Anne wants to stand out and does so through her very colorful fashion choices, taste in music (1970s disco), and dying her hair red. (Green Gables Anne hated her red hair.) Because Anne of Greenville takes place over a period of months instead of years, some of the character development seems rushed.

Nevertheless, this is a book that can stand on its own. Anne is a likable protagonist who narrates the story in a conversational tone that teen readers will enjoy, and the drama that plays out among the teens at Greenville High will keep readers turning the page. The book is an especially good choice for teens interested in social justice issues and for teen members of the LGBTQ+ community who are looking for representation in literature.