The session started off with kisses (of the milk and dark chocolate variety) and a playlist of Al Green and Barry White. The presenter, Lori Lieberman, said that she has become known as “That Romance Librarian” and that when she told people what her AASL presentation was going to focus on she got one of two reactions: squeals of delight or the sound of crickets.

Lori came up with the idea for her session when she was sitting in the exhibit hall at the last AASL in Louisville: “I was just loving that conference so much, and I thought to myself, ‘I want to go to the next conference, and I want to present.” At the same time she was thinking about what her presentation might look like, she was mulling over starting a romance book club at her high school in Portland, Oregon. Several students there knew she read romance and knew she was a safe adult to talk to about the genre. 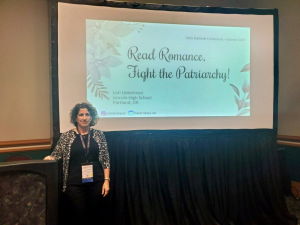 Lieberman noted that she started her romance reading journey a little late in life and was met with raised eyebrows and snide comments from family, friends, book club members, and fellow librarians who often dismissed the genre as “trash” for “stupid unsophisticated readers.” She pointed out that other genres don’t get criticized the way romance does and proceeded to challenge the other dismissive comments that this genre has weathered: the plots are unrealistic fantasy; it’s silly/frivolous/juvenile/fluffy – not “real” literature, pornography, formulaic, and written by hacks.

Before covering the logistics of starting a Romance Book Club, Lieberman went over important definitions and terms that need to be understood in order to embrace this genre which must be a story whose central focus is on love and has an emotionally satisfying (HEA – happily ever after) and optimistic (HFN – happy for now) ending. She stressed that a sad love story is NOT a romance. As NYT best-selling author (and former academic librarian!) Jayne Ann Krentz would tell you, “Life is too short to waste time on books that end badly.”

Once Lieberman’s principal gave her blessing, the Lincoln High School Romance Book Club (LHSRBC) took off. The students select the titles with a bit of input from Lieberman, who receives a fair amount of e-arcs and physical arcs from publishers. The club, which meets once a month, has been lucky enough to host a few of their favorite authors thanks to Zoom meetings becoming a part of their school life last year. The club members are mostly female, but there are a few male members, as well as teacher and staff members. Several of the club members identify as lgbtqia+.

After showing videos of several student club members sharing their favorite romance novels (Red, White, and Royal Blue; The Kiss Quotient; Boyfriend Material; Cemetery Boys), Lieberman noted that the best thing that has come out of the LHSRBC is watching and listening to her students talk so passionately and fearlessly about the genre and their reading: “They all have stories about how reading romance has been especially comforting over the last year and a half and how the books have been a real bright spot for them. I want my students to feel hope and joy and know that they are deserving of love in their lives.”

The session ended with Lieberman sharing a list her students helped her curate. She stresses that to have a successful Romance Book Club, librarians should be seen and heard promoting romance beyond the month of February and celebrating the genre – not denigrating it.