Home › Blog Topics › Are You Ready for Banned Books Week?

Are You Ready for Banned Books Week? 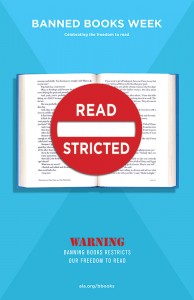 This year Banned Books Week will focus on young adult books which are often targets of censors. The 2014 Top 10 Most Frequently Challenged Books includes YA books such as:

There are many resources available to help you prepare for Banned Books Week including:

What else can you do? Kristin Pekoll, assistant director for the ALA Office for Intellectual Freedom, has advice for school librarian, “I understand that not every school librarian is in a climate where the feel comfortable putting up a Banned Books Week display, but there are plenty of opportunities to initiate dialogue with teachers, students, administrators, and school board members about the First Amendment and censorship” (Kristin Pekoll, email message to author, August 18, 2015).

The list of resources is a starting point to get your creative thoughts going. If you have other Banned Books Week resources or ideas to share, post them as a comment to this blog.