“The world needs your voice.” ~Peter H. Reynolds, Say Something 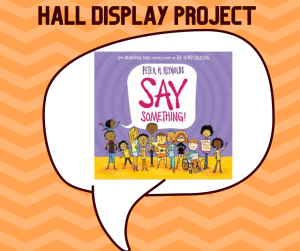 With the constant noise that technology and other means of communication bring to our lives in this era of modern communication, it seems we are in an endless competition to make ourselves heard. And the voices of the future, our children’s, are often the ones that go unnoticed. Just because they might need a step ladder to reach the microphone doesn’t mean that what they have to say is any less important.

Last year, I decided to really listen to my students in a three-week unit on voice–not the voice of a character, but their own.

Week 1: I read my 3rd- and 4th-grade students Say Something by Peter H. Reynolds, a powerful picture book. After discussing the book, I gave them an assignment due the following week. I simply asked them to answer the question: “What do you want to say to the world?” 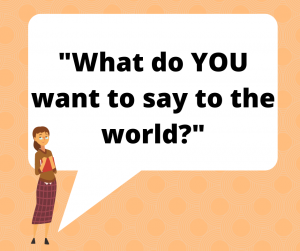 Week 2: When the classes returned to the library the following week, I handed each student a giant speech bubble cut from butcher paper. Students chose to write their statement themselves or, if they weren’t comfortable, I would write it for them. Including their name was a personal choice, but most chose to identify themselves. The kids partnered up to check their sentence to make sure it made sense and to review spelling.

Throughout the week, staff members filled in speech bubbles as well.

Week 3: I hung the bubbles in the main hallway. The display immediately grabbed a lot of attention and I could often find a straggler in the hallway reading away instead of scurrying to class, teachers included. 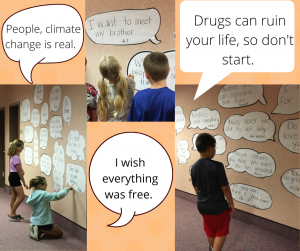 During library class, students were encouraged to take their time reading the bubbles, even writing notes about themes, reflections, and questions. We returned to the library to discuss. One student said she felt that this was the most important assignment she had ever done. When I asked why, she said:

“I never really felt that I had something to say that people would pay attention to.”

Although intended to be a three-week study, the ripples of this lesson lasted throughout the year. During other read-alouds, students would frequently chime in that a character should have said something, instead of standing by or keeping harmful or important thoughts to themselves.

Reynolds teaches us that it’s important to say something with our actions, our words, and our voices. I began pointing out positive examples of when my students did this, whether in the library, cafeteria, or the car line.

A year later, I received an e-mail from a parent, with this photo attached. She said her daughter was redoing her room recently, but said there was no way she was taking down her “bubble” from last year. In fact, she’d been adding to it! 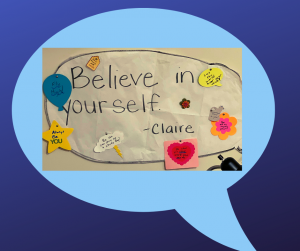 Renee Bowman is the co-creator of the blog for parents and caregivers Raising Real Readers.  She’s twice been a teacher of the year for her district and was awarded the 2019 Samuel F. Hulbert Educator of the Year at Rose-Hulman Institute of Technology. She will complete her school librarian certification from IUPUI in May. You can follow her on Facebook and Instagram at @RaisingRealReaders or on Twitter @RaisingReal.