Scare Up a Good Book

I love Halloween and when I was still a school librarian I loved all the read-alouds that led up to the big day. Below you’ll find some of the books that frequently appeared on my read-aloud stack, no matter what grade level I had in front of me (elementary all the way through high school). 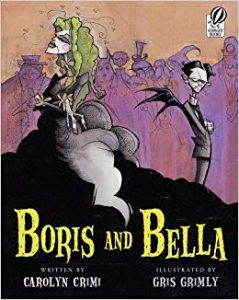 Boris and Bella by Caroly Crimi (Voyager Books/Harcourt, 2006). Bella Legrossi and Boris Kleanitoff, the messiest and cleanest monsters in Booville respectively, do nothing but argue until the night of Harry Beastie’s Halloween party. 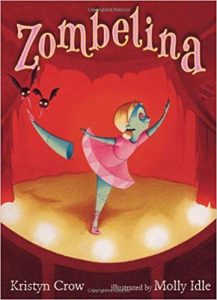 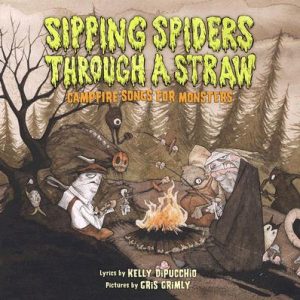 Sipping Spiders through a Straw by Kelly DiPucchio (Scholastic, 2008). A delightfully chilling musical romp through the gross and gory world of campfire songs. In this howlishly fun collection of campfire songs, little monsters everywhere will love singing along to their favorite campfire tunes, which have been altered for optimal gross-out effect by the ghoulish Kelly DiPucchio and illustrated by the Master of Creep, Gris Grimly. 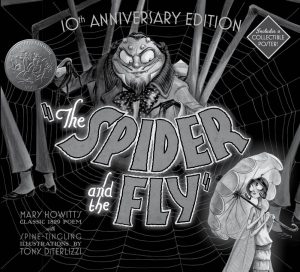 The Spider and the Fly by Mary Botham Howit (Simon & Schuster Books for Young Readers, 2012). An illustrated version of the well-known poem about a wily spider who preys on the vanity and innocence of a little fly. 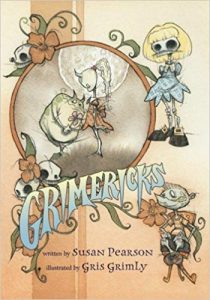 Grimericks by Susan Pearson (Marshall Cavendish Children, 2008).This collection of limericks depicts a host of ghosts, ghouls, and goblins. 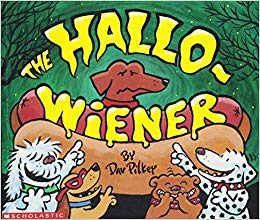 The Hallo-Wiener by Dav Pilkey (Scholastic, 1999). All the other dogs make fun of Oscar the dachshund until one Halloween when, dressed as a hot dog, Oscar bravely rescues the others. 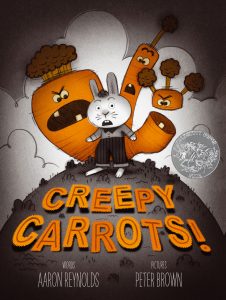 Creepy Carrots! by Aaron Reynolds (Simon & Schuster Books for Young Readers, 2012). The carrots that grow in Crackenhopper Field are the fattest and crispiest around, and Jasper Rabbit cannot resist pulling some to eat each time he passes by, until he begins hearing and seeing creepy carrots wherever he goes. 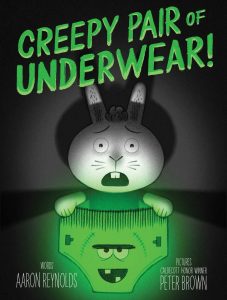 Creepy Pair of Underwear! by Aaron Reynolds (Simon & Schuster Books for Young Readers, 2017). Jasper Rabbit is NOT a little bunny anymore. He’s not afraid of the dark, and he’s definitely not afraid of something as silly as underwear. But when the lights go out, suddenly his new big rabbit underwear glows in the dark. A ghoulish, greenish glow. If Jasper didn’t know any better he’d say his undies were a little, well, creepy. Jasper’s not scared obviously, he’s just done with creepy underwear. But after trying everything to get rid of them, they keep coming back! 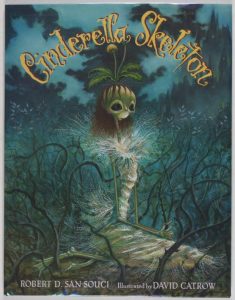 Cinderella Skeleton by Robert D. San Souci (Harcourt, 2004). A rhyming retelling of the story of a young woman who finds her prince at a Halloween ball despite the efforts of her wicked stepmother. The main characters are skeletons. 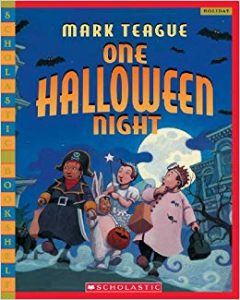 One Halloween Night by Mark Teague (Scholastic, 1999). Wendell, Floyd, and Mona go out in their costumes expecting to have a fun Halloween evening of trick-or-treating, yet after encountering a group of nasty witches, they quickly realize their Halloween is going to be much different from those in the past. 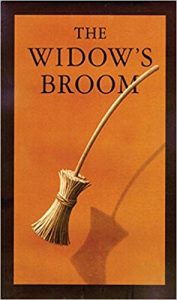 The Widow’s Broom by Chris Van Allsburg (Houghton Mifflin Harcourt, 2018.). A witch’s worn-out broom serves a widow well, until her neighbors decide the thing is wicked and dangerous. 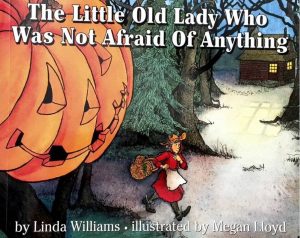 The Little Old Lady Who Was Not Afraid of Anything by Linda Williams (HarperCollins, 1986). A little old lady who is not afraid of anything must deal with a pumpkin head, a tall black hat, and other spooky objects that follow her through the dark woods trying to scare her.

Have a great Halloween. Be sure to put your favorite Halloween read-alouds in the comments.

Associate Professor of Library Science at Sam Houston State University in Huntsville, TX. The author of SCI FI ON THE FLY: A READER’S GUIDE TO SCIENCE FICTION FOR YOUNG ADULTS and SKETCHNOTING IN SCHOOL. She spends her time reading children’s, young adult, graphic novels, and adult romance. She commutes between Oklahoma and Texas every week and listens to a lot of audio books. In addition to reading, Karin doodles and sketchnotes using mostly the iPad Pro and Apple Pencil. She’s been married for 23 years and lives on 29 acres with her husband, Longhorn cattle, three stray tomcats, and one spunky Chihuahua named Pennie.

Like Loading...
‹ For the Love of Literature: Reading Promotions
Picture Books and Primary Sources: Crossing Niagara: The Death-Defying Tightrope Adventure of the Great Blondin by Matt Tavares ›