If School Libraries Had a Super Bowl 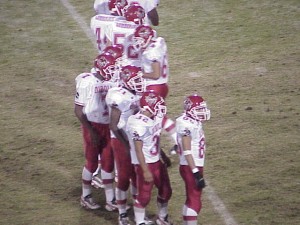 I must confess that I am not a huge football fan.  I am amused when they play in the rain, the ball often squirting out of players’ hands in a muddy free-for-all.  I am fascinated to watch normally agile athletes go sliding uncontrollably across a slick field.  White-outs on a snowy playing field also are entertaining, and I can appreciate the athleticism of a well-caught ball or a nimble receiver dodging and zigzagging around would-be tacklers. While I’m not as bad as my friend who goes to an athletic event with a book and spends most of the time reading, football is just not something I care much about.

The success of our local team with all the attendant hoopla has piqued my interest more than normal this season.  The media has done a good job of hooking me in with some of the human interest angles, and I find I have been paying more attention to the playoffs and now to the looming Super Bowl. Some of the media images that have particularly resonated with me are the heart-warming scenes of joyful players celebrating touchdowns by delivering the ball to a child in the stands.

Obviously, much of the attention has been focused on the quarterbacks, the team leaders, who have so much responsibility riding on their abilities to perform under enormous pressure. They have to be well-prepared, well-spoken, self-confident, committed, collaborative team-players who are strategic, creative, innovative risk-takers. When you think about it, quarterbacks are not unlike school librarians, except that they get paid much better, can retire earlier, get more publicity, more respect, and everyone knows what they do.

Unlike football, school libraries don’t have a specific season. There are no rivalries or divisions or drafts. There is no Super Bowl for school libraries.  Columnists or editors do not write endless stories about our profession. Few commentators or bloggers wax poetically about us. Our activities are not broadcast on televisions in sports bars or anywhere for that matter. Our work is not debated on talk shows. School librarians are not guest hosts or commercial celebrities. There are no fantasy leagues of school libraries, no office pools. In fact, our fans are rather subdued. There are few who applaud the work we do. Fewer still who revel in our successes. No one ruminates over our decisions, our strategies, or our efforts. Our glowing statistics about our impact remain uncelebrated. Sadly, in this very state that is sending its professional football team to the Super Bowl this year, where teacher pay is one of the lowest in the entire country, school librarians are undervalued, underfunded, with their jobs often in jeopardy, especially in the very Queen City where the team plays its games.

What, however, if there were a Super Bowl for school libraries? Could you imagine the possibilities …..

IF a School Library Super Bowl followed the monetary marketing success of its sporting event namesake (which generates more money on one day than any other sporting event), there would be no more need for bookfairs or bake sales or PTAs selling wrapping paper. A library would have more than adequate resources and staffing, and the principal would come to the librarian to justify a budget proposal for school needs.

There would be no need for advocacy. There would be loud and proud fans. Students, parents, teachers, staff, school boards, superintendents, community members, state legislators — all would recognize our value and exuberantly wave the hometown flags, wear clothing emblazoned with the schools’ logo, and ultimately extol the school librarians who so skillfully quarterbacked the library to the big game. Teachers would clamor to co-teach with the school librarian, principals would know what school librarians do, and the entire school would bask in the glow of collaboration and teamwork.

Students would want to spend more time in the school library with their friends and their classroom teachers would encourage them. Students would frequent the school library for a glimpse of the librarian and the opportunity to be handed a book. They would speak with reverence and aspire to be like the librarian. Reading would become a participant sport. School test scores would rise. There would be fantasy library leagues. Principals would make outlandish bets with opposing principals in support of their school’s particular Super Bowl-bound library. The work of the school librarian would be critiqued, her/his skills admired, decisions discussed, and strategies analyzed. School librarians would be heroes.

I can’t help but return to the image of that elated child in the stands who gets the gift of the ball from the football player. The filmmaker conveys a powerful and poignant visual message—an American hero taking time for a child.  Seemingly this gesture makes it okay that we worship our sports heroes and ameliorates the less obvious but sad reality that we are willing to spend so much on our sports and so little on our children’s education.

Clinical assistant professor in the Department of Library and Information Studies at the University of NC at Greensboro working with school library candidates. Former elementary, middle, and high school librarian in Virginia, Mississippi, and North Carolina.

Like Loading...
‹ Let’s Get Together Thursday: Freedom Riders Exhibit Provides an Opportunity for Interschool Collaboration
Directing the Dialog around ESSA and “Effective” School Library Programs” ›