Showing Students the Power of Their Words with Mentor Texts 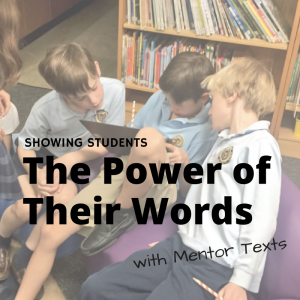 A second-grade teacher shared that she was having friend drama in her classroom, specifically the use of unkind words. She was looking for some mentor texts that she could share with her class that would allow her to address the theme that words can have an impact on others’ feelings. Her objective was to have her students recognize the power of their words. The hope was to help them empathize with the characters so they could begin to understand each other better.

Her question prompted an opportunity for her and I to collaborate. I shared with her how we could do more than just read the books to model the kinds of behaviors she was hoping for, but that we could develop lessons around those books that would allow her students to discuss the themes further. Here are the three lessons that students completed: 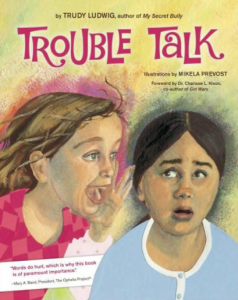 For this lesson, we used the book Trouble Talk by Trudy Ludwig to introduce the theme that their words can impact the feelings of others. Additionally, we wanted students to practice taking turns while working in a group and listening to each other before sharing their own thoughts.

We broke the book into four sections with a question to guide discussion for each section. Students sat in two circles, an inner circle and outer circle. They listened to one part of the story. After reading, they talked to the person sitting across from them to discuss the first question. To help students stay on task we set a timer. Then we returned to the book and read the second part. From there, students discussed the second question, but like speed dating they rotated to a new partner. The activity was repeated four times. Students identified the theme of the story to complete the lesson.

Click here to see questions we used to lead the discussion. 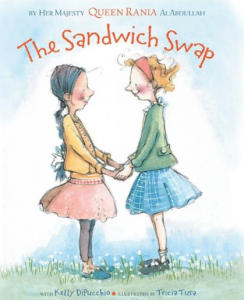 For this lesson, we used the book The Sandwich Swap by Queen Rania Al-Abduallah and Kelly DiPucchio.  Again, this supported the theme that our words can be powerful. We wanted students to recognize that friends can disagree, but that does not mean 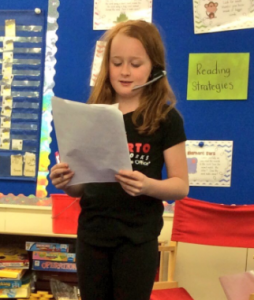 they are no longer friends. Furthermore, we wanted students to make text-to-self connections while placing themselves into a role of a character from the story.

There were three parts to this lesson. During the first session, the book was read and discussed with students. Then during the second session, students were divided into three groups and each assigned a character from the story. Using a script, the students practiced their part with their group. They read through the script several times to make sure they could understand their role and read with emotion. During the final session, each group presented their version of the story to the class. What was amazing to see was that even though each group shared the same story, they all shared it a bit differently.

Here is a copy of the script that was used. 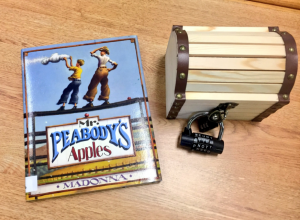 For the final lesson, we used the book Mr. Peabody’s Apples by Madonna. The objective for this lesson was to have students recognize how one character’s words affected the behavior of others. We wanted students to make text-to-text connections between all three of the stories in the unit as well as work together for a common goal.

We began by reviewing the theme of the first two stories. Then students read and discussed Mr. Peabody’s Apples. After reading, students were shown a treasure box with three locks. Each lock 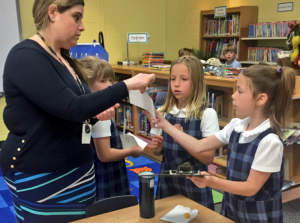 opened in a different way. The students were divided into three groups and had to answer five comprehension questions about the story. After completing each question, they received a clue. The first lock was opened after completing a word scramble that fit the theme of the three stories. The second lock was opened after answering a series of math problems. Finally, the third lock was opened after the group located the hidden key in a library book. The students were able to successfully unlock all three locks. To end the lesson, they discussed what worked and did not work within their groups. We also reviewed how all three books related the theme.

Here are the five questions that students were asked to answer in their groups.

As a teacher, it was interesting to see how the discussion changed over the course of the unit. In the beginning, students did not really want to talk about how they felt when someone had used unkind words. After the first lesson, there were students who the teacher had to follow up with individually because they seemed to withdraw from the discussion. Yet, by the end of the unit students were discussing openly. Additionally, the teacher reported students using phrases like “trouble talk” in their classroom when problem solving. This unit gave students an opportunity to not only see examples of the power of their words, but apply those examples to their own learning.

I am the librarian at Detroit Country Day Lower School in Bloomfield Hills, MI. I have worked as a librarian for the past nine years. I was a classroom teacher for four years prior to that. I have worked in charter, public, and private schools. My favorite thing about being a librarian is the opportunities I have to work both with students and teachers. I love the co-teaching opportunities and connections I have been able to make! I have served on AASL committees as a member and chair. I was most recently a member of ALA’s Ready to Code (RtC) Task Force.