Home › Blog Topics › Stepping onto a Soapbox, Part One: Aesthetics

Stepping onto a Soapbox, Part One: Aesthetics 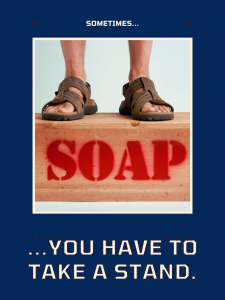 When we mention anyone getting up on a soapbox, we generally mean that they are speaking or writing about something that evokes strong feelings within them. The term, which was first noted in print in 1907, was once a literal one. It referred to a sturdy box or crate used to pack and transport soap, which an impromptu and impassioned speaker could stand upon to address anyone within earshot. Merriam-Webster currently defines it as:

an improvised platform used by a self-appointed, spontaneous, or informal orator
[broadly]: something that provides an outlet for delivering opinions

While I have expressed my point of view in this outlet (and elsewhere) from time to time, I try to do so in an unsensational, non-confrontational manner because, let’s face it: these days, there’s enough drama afoot.

However, sometimes you REALLY have to say something. In fact, that’s an important lesson we can teach our students: when to speak up, and why, and how. I’m speaking up now because I’ve lately seen some things on social media that evoked a response. My response will be as articulate and courteous a manner as I can manage. There you have it: the when, the why, and the how. So, up onto the soapbox I’ll go, for this first part of a two-part post.

Before I do, though, a quick note about social media in general, and Twitter in particular. On one hand, Twitter and other platforms like it can be forums for fomentation and venues for vitriol. That acknowledged, they can also afford the educated user the opportunity to explore a wide variety of resources and subjects, to access and interact with experts, and to establish personal learning networks. That’s where discernment and good judgment come into play. Those are abilities that must be modeled and taught (something which school librarians regularly do, and specifically mentioned in the AASL Standards).

“The aesthetics aren’t merely a side note, they’re as important as anything else.” (Sylvain Neuvel)

Whilst skimming through my Twitter feed, I happened upon an intriguing tweet by Trina Parrish, a high school art teacher in Ohio. It involved the ongoing debate around classroom decorations.

In a nutshell, some folks feel that they’re unnecessary and smack of frippery, while others feel that they’re essential; even when and if there’s agreement on the need for such things, there are often pretty strong opinions about the right way and the wrong way to festoon a classroom. Questions are asked (and everyone seems to have their own “right answer”): How much is too much? How much is too little?  Does EVERY detail need to be utterly purposeful, or is there room for “cute,” too? Is a theme “de rigueur?”

I was interested in Ms. Parrish’s tweet–thread, actually, which you can read in its complete form here–because she validated sentiments that I’ve felt strongly ever since I got involved in education. She opened her commentary by stating that “…There has…been extensive research done on space versus place. We can exist in a space and do just fine, but when we have a sense of place and belonging, we thrive…What does…this mean in terms of education?  It means that sterile, barren spaces provide no sense of place for educators or students.  A thoughtfully curated space will result in better outcomes academically, emotionally, and interpersonally.” (Ah, there’s that word, “curated!” Also, for information on the impact of environment in education, see the references below.)

I’ve written about this before, but I believe it is worth mentioning again. For me, it’s imperative that my classrooms be welcoming; after all, they’re not just MY classrooms, they’re my students’. The spaces are OUR places. Therefore, ensuring that kids feel comfortable, happy, and safe there is a top priority, and yes, it DOES matter how it looks.

In my current librarian incarnation, I’ve put great effort into making the library both more functional and more magical.  When I started, the library seemed…well, neglected.  Simply put, it just wasn’t kid friendly, and this pervaded both the appearance of the space and the accessibility of the resources within it. It seemed to me that if I couldn’t make much sense of how materials were organized, and if I didn’t feel at ease in the room, then there was likely no way that students would, either.

So…I moved different sections of fiction (previously separated by age/grade levels) together and consolidated (and weeded) nonfiction. I made new, more visible shelf markers that also had illustrations for students who weren’t as text savvy, so that everyone could find books with greater ease and independence. I created bulletin boards that were artistic, cultural, interactive, literature-based, and/or thought-provoking. I rearranged tables to encourage more collaboration and discussion during activities. I added small lamps and fairy lights to offset the overhead fluorescent tubes; and let’s not forget the floating candles! These are just a few of the many changes I’ve implemented in the past and am contemplating for the future.

It turned out that my “hunches” have been correct, as I’ve discovered over time. My colleagues have informed me that kids are really enjoying the library again and that they are excited to come to classes there. Students are becoming more enthusiastic readers and writers, and they’re making connections between topics we talk about in the library and discussions they have in their classrooms.

I am glad and proud to say (paraphrasing Huey Lewis and the News) that the heart of the school’s still beating.

Actually, the whole thing was, is, and always will be a work in progress. (Right now I’m in the middle of multiple projects, including a Hygge Hub and a makerspace.) As I learn–from you, my awesome fellow librarians, from teachers like Ms. Parrish, from my librarianship courses and the faculty who instruct me, from my students–the library will continue to change…hopefully, for the better.

With that, I’ll get off my soapbox…for now, at least. (Stay tuned for part two–about book challenges–coming soon to a blog near you!) In the meantime, I’ll be happy to listen to you when you get up on a soapbox of your own.