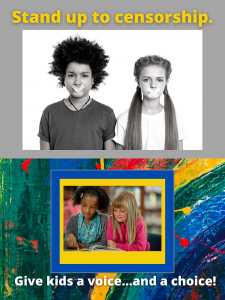 In my last post, an acknowledged two-parter, I promised that I’d be back up on my soapbox again in the near future. Well, the future is now.

I have a confession to make: I fangirl Jacqueline Woodson. If you haven’t yet had the experience of reading one of her books–memoir, novel, picture book, or ANYTHING she’s written, really–get thee to somewhere fine books are sold, and quickly, too. (You could go to a library, of course, but trust me, you might end up wanting to own her work.)

Imagine how I felt, then, when I saw Ms. Woodson tweet in July that her award-winning memoir in free verse, Brown Girl Dreaming, was “being challenged because of ‘CRT’,” or Critical Race Theory.

I admit it; I was hopping mad. (Don’t even get me started on how Culturally Responsive Teaching or Culturally Relevant Teaching and Critical Race Theory are different things, or on why neither is anything to get up in arms about, because then this wouldn’t be a post but an epic.)

Today–the Tuesday of Banned Books Week 2021–I am still angry, even though two months have gone by. In fact, I may be more angry, as I just read minutes ago that Jerry Craft’s New Kid (also an award-winner) and its sequel, Class Act, are the subjects of a petition and challenge within Texas’s Katy Independent School District.

Quite frankly, I wonder if folks who object to these books have ever cracked their pages. To quote the magnificent Jason Reynolds (who–although he was referring to something else–recently tweeted this always-perfect advice):

Having actually read Brown Girl Dreaming (and New Kid and Class Act), I see no (legitimate) reason to challenge them. (There are many reasons to celebrate them, mind you.) Given that, it seems that reason itself plays no part in why the books are being challenged. However, other things may play a part in this; and what “this” is is censorship.

“Censorship is to art as lynching is to justice.”

Librarians have been fighting against censorship and fighting for intellectual freedom for ages. The American Library Association’s position and direction are very clear, as its Freedom to Read Statement and other documents strongly indicate.

We all must be as prepared as we can be for all of the challenges life throws at us, and challenges to the books in our libraries are among them. (In fact, AASL President Jennisen Lucas recently addressed this very subject in a wise and excellently crafted Knowledge Quest post that I just loved.) Make sure you–and your school district–have a policy and process in place. For instance, thanks to Longwood University’s School Librarianship faculty and courses, who have given me LOTS of guidance and information, I’ve updated (re-created, actually) our library’s policies within the past two years and can categorically state that they are clear and current. They’re posted on our library’s website and are available in hard copy, so that anyone and everyone can access them (you can have a look at them here).

In today’s climate–where even the climate itself is a subject of heated debate (yes, pun intended)–putting extra effort into writing and/or revising library documents is no longer just important but imperative. This is especially true for those policies related to intellectual freedom and the process for handling book challenges.

To go a step further: sometimes you may need to stand up and speak out, too. Perhaps nobody will take note; maybe many will. That’s not what counts; being counted does. My own response to censorship in general (aside from wanting to hurry and buy multiple copies of a challenged book for our library), and Ms. Woodson’s tweet in particular, was a mini-manifesto (which you can read here.)

True story: it wasn’t the most restrained I’ve ever been. However, I feel that when, why, and how I responded was appropriate for the arena and the issue. There’s no way I could sit idly by and let great art be maligned, or have my students miss the chance to experience it. Of course, its greatness is subjective, as is the case with any work of art, and kids and colleagues and people on the street are allowed to disagree with my favorable impression of it.

Isn’t that the point?

They should get the opportunity to decide for themselves.

So, be ready to defend all the books on your shelves.

That said–in rhyming couplet, no less–I’ll put away my soapbox.

Wait…perhaps you need to borrow it? If you do, feel free; but be warned that I just might ask to have it back again.