Home › Blog Topics › Advocacy/Leadership › Stories Have Power: YA Fiction as a Life Model

Stories Have Power: YA Fiction as a Life Model

I was enjoying the anthology Geektastic: Stories from the Nerd Herd, an anthology of stories about “geeky” YA protagonists edited by YA authors Holly Black and Cecil Castellucci. The book includes an array of tales from some amazing YA authors. It celebrates teen geeks of all stripes. But toward the end, I found myself very disturbed by one of the stories.

In one of the short stories in the book, a teen gets insulted once and in retaliation destroys the insulter’s life on an epic scale. It’s written to suggest that the protagonist is a hero for having completed this revenge. She is touted as completely in the right to do so. This message, particularly when aimed at a YA audience, is really upsetting.

That is a SERIOUSLY messed up message to give to any audience, but a YA audience most of all, particularly in the social media age. One might argue that, since the story dates back to 2009, social media was not as prevalent, but even then, online sharing among teens was causing issues, so the age of the text is not an excuse.

Even if the antagonist is “mean” (according to two characters, each of whom seems to have had one unpleasant interaction with her), telling kids it’s righteous to utterly ruin someone’s life because they’re not nice is unconscionable.

I mean, I get it; I was a teen geek. I felt alone. I had some folks pick on me. The idea of being the one exacting revenge against my oppressors would have filled me with glee at the time. Teen-aged me also rode home from a school dance laying down in the back seat of the car, crying, insisting to my mother nothing was wrong, because a girl said she didn’t want to go to the movies with me. So, perhaps my teen-aged self isn’t the best guide to picking what’s appropriate.

Here’s the thing: stories are not just stories, especially when they’re aimed at a younger audience. They provide guidance and suggestions for how to live one’s life.

Yes, every kid should be who they want to be and not have to be harangued for it. And while I’m not a fan of in-kind revenge, I can accept that it makes for a good story. And yes, it’s important for kids to learn to stand up for themselves. But that’s not what this story is about. This story is about destroying someone’s life because of a minor slight.

Clearly, this story touched a nerve for me. Partly, it was shocking to read this story after the other empowering and affirming tales in this book. But it was largely because we often brush things off by saying “It’s just a story.” But stories have power.

As a teacher, I see students every day talking about what they’ve learned from what they’re reading. I think most rational folk would agree the world’s pretty messed up these days. It’s on us to help make it better–each and every one of us. Stories are a powerful way we can do that. What lesson can we expect kids to take from stories that show people exacting revenge and destroying others over slights? And being held up as heroes for it?

I’m not advocating for sanitizing stories. The world can be a hard place, and stories are the windows and mirrors that helps kids see it, and see themselves in it. But stories create models for readers. Stories don’t have to encourage kids to react based on their emotional instincts–which, because they are teens, are hypersensitive. And stories definitely don’t have to give them guidance in using their intellect to get away with committing crimes. That’s not how things get better.

In a World of Increasing Tribalism…

Soon after reading this story, I read an article about the decline of empathy in teenagers. According to article author Hanna Rosin, “Their feeling was: Why should they put themselves in the shoes of someone who was not them, much less someone they thought was harmful? In fact, cutting someone off from empathy was the positive value, a way to make a stand” (2019). Rosin cites research that suggests this tendency is increasing.

The trend of shutting out those who seem different? That’s not just in your head; there’s a measurable and increasing sense of tribalism at work in the world. One researcher “is alarmed at the apparent new virus of selective empathy and how it’s deepening divisions. If we embrace it, he says, then ‘basically you give up on civil society at that point. You give up on democracy. Because if you feed into this division more and you let it happen, it will become so strong that it becomes dangerous’” (Rosin 2019). Social media helps accelerate this trend, making it easier to isolate ourselves and focus only on our own “team” and messages that reinforce our views.

…We Can Bridge the Empathy Gap 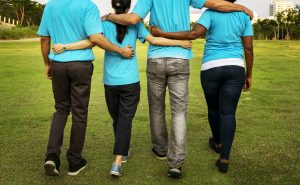 But there are other paths we can take. Writer Arthur Brooks, in his new book Love Your Enemies: How Decent People Can Save America from the Culture of Contempt, has found through studies that people are able to overcome their contempt of others if they can take in information from both sides of a situation. In other words, exposure to windows and mirrors can help bridge the tribalism gap.

In a world that is increasingly tribal, schools and school libraries become even more important. They are a place where we can expose students to “the other” and help them see that “the other” is not worthy of our contempt. We can show that, while it’s important to stand up for ourselves, there is also a place for compassion and empathy.

We curate collections of materials for a YA audience. It’s important to bear in mind that we are also collecting lessons. Among the entertainment and enjoyment provided by stories are models of how one can think and behave and interact with the world. Humans have a long history of sharing stories, because we love them. We have always learned from stories. So it is important to think about what stories we give our students to learn from.

If we want to see a brighter future, we need to think globally, act locally, and educate our future–one story at a time.

Brooks, Arthur C. Love Your Enemies : How Decent People Can Save America from the Culture of Contempt. New York, NY, Broadside Books, An Imprint Of Harpercollinspublisher, 2019.

Like Loading...
‹ 5 Things I Love about Author Visits
Aligning Your Practice to the AASL National Standards: Quick Reflection Activities to Get Started ›