Ms. Salinas, a second-grade teacher at Old Town, is full of energy and creativity. Whenever I approach her with an idea, her answer is always yes! I went to her with an idea I had for stop motion as a way to generate products that illustrate learning (AASL I.B.3). After some discussion, we settled into using stop motion to recount a story, events, and the actions of characters (NC SCS RL.2.1, 2, 3).

Ms. Salinas and I started by building a webpage for her study of Don Freeman’s Corduroy. She developed differentiated materials using Google documents and slides. We embedded those lesson elements into the webpage so that groups could:

Through this stage, my part was as a consultant on setting up the interactive website. After several weeks of the class working through Corduroy, they were ready to start making the stop-motion.

One of our district DTL coaches introduced me to an app called Zing Studio, which makes stop motion incredibly easy. You set up your mobile device, open the app, and take a picture for every little move. Then it creates the stop-motion video for you!

Generally when I try something new, I work with a small group. Then they actively participate in designing the plan and choosing materials that might work. That wasn’t the case here, since I would be working on this as an entire class. And at the beginning, I only had 30 minutes with the class once or twice a week. So I wanted to figure out a way to make the process easy to understand, and we needed materials in larger quantities. I thought about StikBots, but I only have one set of those. Even if I could find a couple to borrow, I wasn’t sure that would be enough.

So, I did what any innovator would do, I went to the supply room and started shopping. One thing we had in great supply was construction paper in all kinds of colors and sizes. There were also plenty of markers and scissors. With these supplies in hand, I went back to the library and made a Thanksgiving stop-motion.

After the class was well into their Corduroy study, I showed them the Thanksgiving stop motion along with the materials I used to make it.

Day 1: Students identified elements they saw in the Thanksgiving stop motion and made connections between what was on the board and what was in the video. They hypothesized how different movements in the stop-motion were made using the raw materials, and then they tinkered with the materials to see if their predictions held true.

Day 2: Students brainstormed ways we could use this with a Corduroy retell and decided to break the story up into sections with enough groups to illustrate each part of the story. Some of the groups ended up being a little large, but this class is used to working together in groups, so that wasn’t a problem. 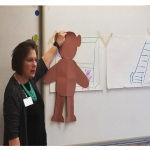 Day 3: Students chose their scenes and started planning. Groups got two sheets of white large white construction for the background. We discussed:

Days 4-8: Students worked on scenes. We had lots of white paper so they could start over at anytime until they were happy.

Days 9-10: Students made Corduroys and speech bubbles. Since we wanted this to be as original as possible, I showed the students how to fold a brown piece of paper in half to cut out a bear. After lots of trial and error, along with lots of laughter, each group had a useable Corduroy in a pair of green overalls to use in their scene.

Putting It All Together

We are at the point now where each group is coming to the library and we are using Zing Studio to film each scene.

Our next steps are to use WeVideo to edit out the places where we caught the people moving Corduroy, and I’m hoping to add an audio retell with the scenes. Hopefully, I can share this phase with you next month!