When I talk of summer reading, I’m talking about that thing that most students will say ruins their summers. 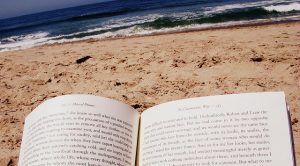 Like many schools, mine struggled with what to do with summer reading for a few years. We did an all-school read. Not terribly popular. We did an all-school read with an author talk in the fall. Slightly better received, but still not great. We gave the students choices among three books selected by faculty with a packet to be completed over the summer. That really ruined the summer for the students.

One year we decided to go in a completely different direction. Taking a page from Abington Friends School (Jenkintown, PA), we put the students in charge.

At a meeting of the independent school librarians, the library director from Abington told us about their summer reading system where students volunteered to be book leaders, chose a book, pitched the book to their classmates, and then led discussions when school resumed in September. This sounded like the perfect solution. I brought the idea to the head of our upper school and the English Department (those who had been in charge of summer reading) and she was thrilled to give it a try.

We’re now going into our fifth year with this model and it has worked out wonderfully. Here’s how it works:

Some years a student may approach the head of the Upper School and ask to be a Book Leader. Most of the time, though, the two of us put our heads together and identify two students in each grade to take the roles. I think we’ve only been turned down once.

Once we have identified the students, we ask them to take some time and come up with a book they’d like to lead a discussion for. The choices have to be approved by the Upper School head. This was where we were nervous that first year. How seriously would the students take it? Would they pick books that would be appropriate for a high school assignment?

The students exceeded our expectations. The only titles we have ever had to turn down were The Girl with the Dragon Tattoo and Game of Thrones, both suggested by the same student who was unfamiliar with either book, and had only heard of them. (When asked if he knew that Game of Thrones was 900 pages, he quickly withdrew the suggestion.) The first year, the choices included Stiff by Mary Roach, Orwell’s Animal Farm, and Ready Player One by Ernst Cline.

Once all of the choices have been made, the Book Leaders stand before the upper school one morning and make a pitch for their book. Sometimes they’re mysterious (this year two of the choices are Shadow & Bone and We Were Liars) or funny (one student pitched his book in character) or practical (Animal Farm was touted for its low page count). They’re always passionate.

Over the summer all students keep a reading log to be turned in to their English teachers. Book Leaders keep in touch with their faculty advisers to develop a series of discussion questions.

The first week back at school, we take one afternoon and break into our groups to talk about the books. The discussions have always been interesting and lively – a fistfight almost broke out over War of the Worlds and things got heated over Sam Spade’s moral character. Some students still hate the books they read, but they love being allowed to talk about why they hated the book.

From the adult perspective, this model has been a hit. And when I talked to students to prepare for writing this, I found out they love it just as much.

Justin, a senior, who has been a Book Leader for three years told me that the group discussion is the best part. “Other schools just ask you to answer questions about the books, this gives us a chance to really think about it. Having to do an analysis was perfect.”

Jake, a junior who likes to tell me how much he doesn’t like to read, thinks this system, “gives us better options because our classmates know what we like.” He actually enjoys summer reading. Would he enjoy it as much if I picked the books? “No.”

Katie and Jack are moving into the upper school next year and will be first-time Book Leaders. They also like the prospect of the discussions. “The discussion has a one-on-one feel. We have to come back ready to talk to each other about the book. We can’t just read it and forget everything after we answer some questions.” What did they like the best? “The freedom to pick what book we wanted,” Jack told me.

Katie agreed, “I felt a lot of responsibility to pick a good book because I’m responsible for introducing my friends to a new world or a new author they don’t know about yet.”

The program has been so popular with the students that our professional development committee decided to try it with the faculty and staff. Given the almost immediate responses with title suggestions from across departments, it looks like the adult version may be just as successful.

Have you found a secret to your summer reading success?