Home › Blog Topics › Teaching about Justice through Partnerships with Brown v. Board of Education NHS

Teaching about Justice through Partnerships with Brown v. Board of Education NHS

I (jmf) have been serving as a summer school librarian in an Indianapolis, Indiana high school. In the brief moments that I have a break from the demanding teaching schedule, I have been updating the Information Center’s display cases. I am no artist, but I have been inspired by the changes going on in our country. I’m still playing with visuals, but here’s my first draft: 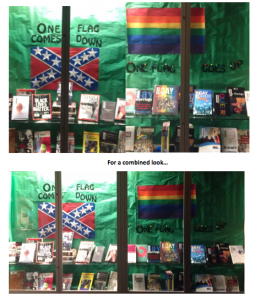 Working on the cases has made me ponder how often school librarians are involved in educating young people about our country’s history of racism and equal rights. I often hear librarians talk about their balanced print and e-collections and their display cases that promote them. However, I’m interested more in what we are (pro)actively doing to educate young people, beyond purchasing the audiobook of Kristin Levine’s Lions of Little Rock or promoting John Lewis’ graphic novel series March. Yes, creating a diverse collection is part of our work… along with putting them in prominent places and talking about them with young people. But, how are we as school librarians collaborating with local and global community partners to join classroom teachers in teaching about justice? In what ways are we empowering young people with the skills to create e-exhibits that tell their district’s, city’s, or state’s story of (in)justice?

We (jmf & Vaughn) would like to (re)introduce a compelling story of how ordinary people changed the world they lived in for the better – one that you may find will spur discussions and improve understanding of where we’ve come and where we’re headed.

WHAT WE KNOW: A BRIEF HISTORY
Most are familiar with the landmark United States Supreme Court decision in the 1954 case of Brown vs. Board of Education of Topeka that declared the practice of having separate public schools for black children and white children to be a violation of the United States Constitution. The Court’s decision in the case was unanimous, and it overturned a ruling from the Court in 1896 in the Plessy vs. Ferguson case that allowed segregation of public schools in states that decided to do so.

BY THE NUMBERS
Formal and de facto systems of racial separation existed as a fact of life in the United States from the conclusion of the American Civil War in 1865 to the time of this Supreme Court case. Segregation of these two races in public schools was a requirement in 17 states at the time, mostly the states that compromised the Confederate States of America that had seceded from the United States prior to the start of the Civil War. Segregation was permitted to exist in 15 more states and was outlawed in just 16 of the 48 States at the time of this case.

BY THE NAMES
Thurgood Marshall, chief counsel for the National Association for the Advancement of Colored People (NAACP) at the time, eloquently argued the case for the plaintiffs. The primary plaintiff was an African-American parent and railroad worker named Oliver L. Brown, whose third grade daughter (Linda) was bused across town to her segregated school at the time. There was a far superior white-only school in the family’s neighborhood that was off limits to her and this struck many as unfair, especially those immediately affected.

Marshall, arguing on Brown’s behalf, used effective legal arguments that exposed the transparent and farcical claims of the segregators that the facilities in these public schools, while admittedly separate, were still in fact equal.

The Fourteenth Amendment to the United States Constitution requires, in part, that “no State shall… deny to any person… the equal protection of the laws.” Marshall effectively demonstrated the profound degree to which the public facilities for African-American children were obviously inferior and his arguments found unanimous consent from the nine Justices, who ruled in Brown’s favor.

WHAT IT MEANT
The ruling’s impact, while narrowly applying to the American public school system, was an important symbolic ruling as well. It was nationally publicized and would be the first legal indictment of any of the various immoral and unethical systems of racial separation that marked American society at the time, systems which formally denied equal opportunities to African-American citizens.

The historic efforts of many who stood up to this oppression and inequality legally exposed these unconstitutional systems and was cause for great celebration in many circles of American society. It also clearly paved the way for tens of thousands of others to challenge and reform virtually all segments of American society where segregation existed over a remarkable era of progress in American history that took place over the next 15 years or so.

Integration of public bus systems, restaurants, movie theaters, and restrooms would follow, among other efforts. Voting rights for African-American citizens were affirmed, improved and codified. Access to higher education, public office and housing was also more open and possible. And of course the landmark ruling that integrated schools have improved fair access to high-quality public education for more American children.

MORE THAN SIXTY YEARS LATER
Over sixty years have passed since this important ruling. How far have we come? How much farther do we have still to go?

The Visitor’s Center and staff at the Brown V. Board of Education National Historic Site in Topeka, Kansas, interpret the story of how this important Supreme Court decision came to be… and tell us about the ordinary, everyday people who took part in this tense and dramatic moment in our nation’s history.

Their website offers links to:
(1) interact with a Park Ranger Educator,
(2) curriculum materials for students, teachers and parents,
(3) information on how to plan virtual or in person field trips, and
(4) links to information about the collections at the Topeka site, and much more information and resources to help understand, discuss, and put these events into perspective.

We encourage you to contact this National Park Service site and plan a collaborative unit in the upcoming year. In what ways could you supplement their resources with those from the Smithsonian e-exhibit, National Public Radio’s audio resources, or StoryCorps’ related audio narratives? Go local! Could your students design e-collections similar to these that retell your district’s history to create (more) equal public schools? What voices have been heard when your district’s history is commonly told? What voices have been silenced? How can your students uncover both?

After your collaborations and projects, let your students grade your school… What grade do they think Mr. Thurgood Marshall, Mr. Brown and little Linda Brown would give your school on the test of creating integrated, equal public schools for all? How is that grade different from the grade you would assign? Or your administrator? Or your school board? Or your community? In this situation, whose grade matters most? How can we work together to reconcile the difference(s) in the grade we would assign?

Like Loading...
‹ How to Lead a Successful Problem Based Learning Project: 2nd Grade Reduces Garbage in the Cafeteria
Ideas for Using AASL Best Websites: 2015 ›