The Importance of Advocacy at the State Level

I joined the Missouri Association of School Librarians (MASL) in 2001 and started taking an active role in the organization in 2004. As a classroom teacher and later as a school librarian, I’ve always believed membership in professional organizations is essential for professional growth. So, several years ago, when a colleague was debating whether or not to renew her MASL membership and asked me what members got in return for their dues, I was taken aback. I don’t remember exactly what I told her, but I know I mentioned MASL’s readers’ choice awards and professional development opportunities.

Looking back, my answer was okay, but it could have been better. If I were asked the same question today, I would also talk about the importance of  MASL’s advocacy efforts. As we all know, education is a state responsibility, not a federal one. While the federal government passes laws like the Every Student Succeeds Act (ESSA) that affect public education, state legislatures are where the most impactful decisions are made. As school librarians, we would all like to see laws that require a certified librarian in every school and healthy budgets for every school library because those are two necessary components of a strong school library program. Unfortunately, political reality in most states dictates such legislation unrealistic. So, MASL and other AASL affiliate organizations lobby state officials in an attempt to strengthen school library programs through incremental steps. Recent successes at the state level include: 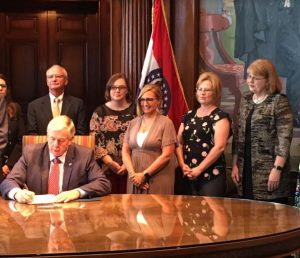 These successes may seem modest, but they took a great deal of time and effort as advocacy is a continuous process. The library-related provision in the Missouri law, for example, is the result of 2½ years of work on the part of the MASL Advocacy Task Force and the association’s lobbyist. The work began with a customized “Libraries Transform” awareness campaign that included renting billboards in Jefferson City and sending each member of the General Assembly a copy of Scholastic’s School Libraries Work! A Compendium of Research Supporting Effective School Library Programs. MASL members did their part to advance the bill by contacting their state senators and representatives and by encouraging others to do the same. Moreover, the membership dues of MASL members provided the necessary funds to pay for advocacy activities.

If a colleague asked me today what members get by joining their state school librarians association, I would say, “They get the opportunity to be part of and contribute to an organization that advocates for library access for every student in the state. As school librarians, we need to support that because we care about all kids.”