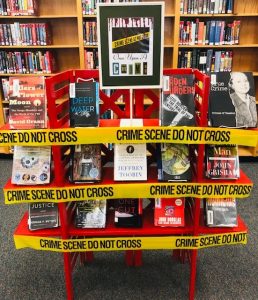 True crime is wildly popular with students across the country, and my students are no exception. If your teens are anything like mine, they are just as fascinated by tales of murder and misdeeds. I’ve previously shared how I capitalized on this interest in the classroom with our criminal profiling unit, but I also use this interest to market books and get students reading. Last year I created a “Once Upon a Crime” display that was popular in my library. I have seen other libraries create displays that pair books with podcasts. This would be a great idea to appeal to those true crime podcast devotees. I’d like to share a few true crime titles written and marketed especially for teens that I recommend for your collections.

First up, the Simon True series. These factual accounts of real crimes committed by real teens are attention grabbing and engrossing. With four books released so far, Simon True is a go-to for true crime fans.

The Acid King: A murder in a small Long Island town reveals the dark secrets lurking behind the seemingly peaceful façade in this installment of the Simon True series.

Deep Water: A group of teens traffic drugs between Mexico and California in this book in the Simon True series.

One Cut: A backyard brawl turned media circus filled with gang accusations turns a small, quiet town upside down in the second book in the new Simon True series.

59 Hours: An innocent teen becomes a hostage stuck in the middle of a dangerous drug-fueled feud in this third book in the chilling Simon True series.

Additional recent titles your teens will love include the following:

The 57 Bus: This nonfiction book for teens about race, class, gender, crime, and punishment tells the true story of an agender teen who was set on fire by another teen while riding a bus in Oakland, California.

The Borden Murders: August 4, 1892: Lizzie Borden calls out frantically for help. When the maid and the neighbors come running, they find Lizzie’s father, Andrew Borden, lying murdered in the sitting room of the Borden home at 92 Second Street in Fall River, Massachusetts. Soon after, the body of Lizzie’s stepmother, Abby, is discovered upstairs.

As the minutes give way to hours, one person rises to the top of the list of suspects: Lizzie herself. But how could a mild-mannered young woman from a prominent family be an axe murderer?

Blood, Bullets, Bones: Ever since the introduction of DNA testing, forensic science has been in the forefront of the public’s imagination, thanks especially to popular television shows like CSI: Crime Scene Investigation. But forensic analysis has been practiced for thousands of years. Ancient Chinese detectives studied dead bodies for signs of foul play, and in Victorian England, officials used crime scene photography and criminal profiling to investigate the Jack the Ripper murders. In the intervening decades, forensic science has evolved to use the most cutting-edge, innovative techniques and technologies.

In this book, acclaimed author Bridget Heos uses real-life cases to tell the fascinating history of modern forensic science, from the first test for arsenic poisoning to fingerprinting, firearm and blood spatter analysis, DNA evidence, and all the important milestones in between. By turns captivating and shocking, Blood, Bullets, and Bones demonstrates the essential role forensic science has played in our criminal justice system.

I hope these suggestions will help you build your collection of titles your students will love. Are your teens as interested in true crime as mine are? What true crime books would you recommend?

Brandi Hartsell is the school librarian at Halls High School in Knoxville, TN. She was awarded Teacher of the Year at HHS in 2021. Brandi was also recognized alongside colleagues as recipients of the Tennessee Association of School Librarians (TASL) Teacher Collaboration Award in 2019 and 2021. She has served (and continues to serve) in many leadership roles within TASL. Brandi has presented professional development sessions for TASL, Halls High School, and Knox County Schools. Brandi loves sharing ideas and brainstorming…also cats…and true crime. Follow her on Instagram @hhslibrarytn.

Like Loading...
‹ Podcast and Video Studio in the School Library
Perfectly Possible: Library of Congress Primary Sources in YOUR Library ›