Home › Uncategorized › Two YA Mysteries Sure To Be Popular This Year

Two YA Mysteries Sure To Be Popular This Year

With the beginning of each school year, I look forward to seeing which titles will be the most circulated ones in my library. Sometimes I can accurately predict what will be popular, and other times a sought-after title takes me by surprise. In preparation for this school year, I read two books by well-known YA authors that I expect to be popular with my students this year based on the fact the authors’ previous books were big hits. Here are my reviews, which I have also shared with my school community. 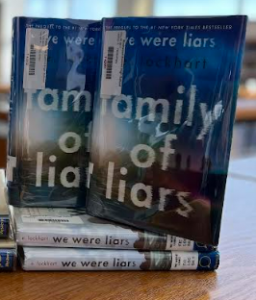 In this prequel to the wildly popular We Were Liars, Lockhart returns to Beechwood Island and the family at the center of the original story: the extremely wealthy and very dysfunctional Sinclair family. While the initial book told the story of Cady and her cousins, this one centers on the previous generation, primarily Cady’s aunt, Caroline (Carrie) Lenox Taft Sinclair.

When asked about the “absolute worst thing” she ever did, Carrie recalls the summer of 1987. At that time, seventeen-year-old Carrie is recovering from jaw surgery and grieving for her youngest sister, Rosemary, who drowned the previous summer. To cope with the physical and emotional pain, Carrie relies on codeine. Meanwhile, two unusual things happen on Beechwood Island that summer: first, Rosemary’s ghost visits Carrie on multiple occasion; and second, Carrie’s cousin, Yardley, invites three of his friends to visit for the summer. Carrie develops a crush on one of them, a young man named Pfeff, and the potential romance provides her with a much needed distraction.

What makes the narrative intriguing is that readers know Carrie is setting the stage for a shocking confession. Moreover, readers already familiar with the Sinclairs will be eager to see what light Carrie’s revelation will shed on the problems of the next generation. Even though the revelation isn’t quite as shocking as the one in We Were Liars, Lockhart’s skillful balance of suspense, teen angst, and family secrets will hook teen readers. 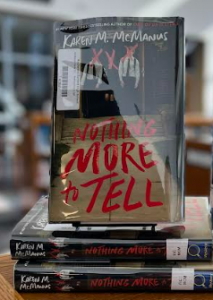 Nothing More to Tell by Karen M. McManus, Delacorte Press, 2022.

(Thanks to NetGalley for providing me with an advance reader copy of this book.)

Brynn Gallagher returns to St. Ambrose School in Sturgis, Massachusetts after living in Chicago for four years. Shortly before she left, someone got away with the heinous murder of beloved English teacher Mr. Larkin, whose body was found in the woods behind the school by three students — Charlotte, Shane, and Tripp, all of whom are now seniors at St. Ambrose.

When Brynn, an aspiring journalist, secures a coveted internship with Motive, a television show that focuses on true crime, she begins investigating Mr. Larkin’s death. That means trying to find out if her three classmates told the police everything after they found Mr. Larkin’s body, a topic none of them wants to discuss. As Brynn continues her investigation, she discovers that not everything is as it appears. Maybe Mr. Larkin wasn’t such a good guy after all. Moreover, a lot of people at St. Ambrose are keeping secrets. The twists, turns, and red herrings will keep readers guessing until the very end.

As with McManus’s previous book One of Us Is Lying, social status and high school politics hook the reader just as much as the mystery does. In this case, Brynn and Tripp were best friends until the day before the murder, when Tripp intentionally embarrassed Brynn in gym class. They never spoke after that. Upon her return, Brynn quickly sees that Tripp’s closest friends are Charlotte and Shane, making Brynn think that the three of them have some sort of secrecy pact. Brynn still cares about Tripp, and her attempts to make him realize that fact make for a compelling subplot. Tripp’s heartbreaking backstory makes him an especially sympathetic and memorable character.

What books do you think will be popular in your school library this year?

Tags: YA books, YA Lit