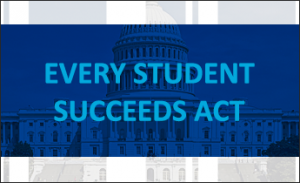 Over the past month, I’ve been fortunate enough to have the exciting opportunity to present at three AASL state affiliates as part of the organization’s efforts to support school librarians in getting libraries incorporated into their state’s ESSA implementation plans. The experience has made clear to me the imperative for leadership in our profession and AASL’s invaluable support in response to that need.

The Every Student Succeeds Act (ESSA), the re-authorization of the Elementary and Secondary Education Act (ESEA) of 1965, was a particular landmark for the school library community as it authorizes the expenditure of federal funding to support effective school library programs. But while ESSA explicitly allows funding for school librarians as educational support specialists, it does not mandate their inclusion in the funding, leaving that provision up to individual states. AASL has been proactive in supporting librarians’ development of practical action plans  for securing inclusion in each state’s strategic planning.

For much of the workshop, Emily Sheketoff from ALA’s Washington Office does the heavy lifting, talking about the history of the legislation and various provisions for libraries via video components. The facilitators then add some talking points and facilitate two small group activities.

Deputy Executive Director Allison Cline and the AASL staff have done an excellent job pulling together handbooks for each state (http://essa.aasl.org/state-workshops/), researching the progress of each state’s efforts involving the re-authorization, and offering links and contact mechanisms for the public comment component that are a necessary element of state plans. Every state has an online forum available through the AASL ESSA website for continuing virtual work and networking between affiliates. 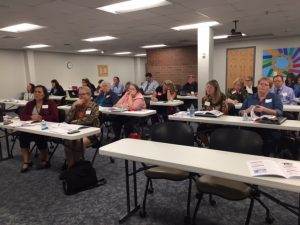 The Utah Educational Library and Media Association (UELMA) workshop at the State Department of Education on October 12 featured some of the best ideas for building local coalitions I had ever heard, including approaching local hospitals and other health organizations as partners. The members of the UELMA group clearly contextualized education as a public good that would raise the standard of living for the entire community and that permeated the message development. 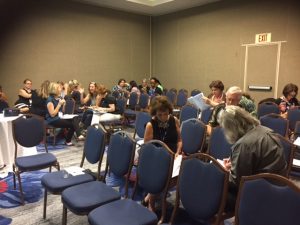 The Florida Association of Media Educators (FAME) workshop took place on October 21 during that group’s lively Annual Conference in Orlando. The usual workshop format was split into two portions to fit into paired concurrent sessions, the first involving background on ESSA and the second strategies for working with elected state officials. Some districts had developed their own rigorous guidelines, often going beyond the state’s Praxis qualifications for school librarians to mandate eighteen hours of library media coursework from an approved program. Others were concerned about areas of the state without any library professionals in schools, about districts without coordination, and about libraries being commandeered for testing. The group shared strategies for connecting with local legislators, including the importance of coordination in using the term “school librarian” in conversation. 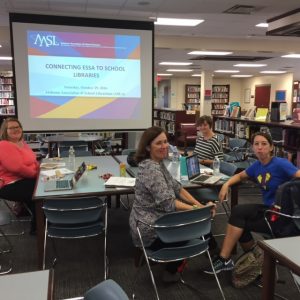 My own state affiliate, the Alabama School Library Association (ASLA), held its workshop Saturday, October 29, at Vestavia Hills High School. We met with one day remaining for public comment, so we took advantage of the summative elevator-pitch exercise to use the online form to express our interest in including school libraries.

The three workshops showed me the very different approaches of the three groups and their relationships with state education officials. It confirmed my suspicions that many children do not have access to school libraries, what I consider unnecessary deprivation of an integral component of public education.