Home › Blog Topics › What to Do for Banned Books Week?

What to Do for Banned Books Week? 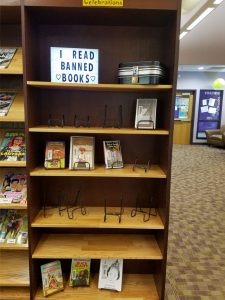 My Banned/Challenged book titles are dwindling.

I look forward to September every year, as it’s my opportunity to focus on our freedom to read.

Each year I revamp my Banned Books Week presentation to stir in my students a renewed spirit to read what they want. The upside of someone attempting to ban/challenge books such as the Harry Potter series, the Percy Jackson series, the Bone series, Diary of a Young Girl (Anne Frank), and the list goes on, is that it motivates students to devour that literature. I have had to dig deep to keep my Banned Books Week display stocked.

I have middle school students, fifth through eighth grade, for 45 minutes during their Library Media Center rotation. This year during Banned Books Week, my students played a guessing game about banned/challenged book titles. I gave some clues and students about the books, and they had to guess the title. The discussions that this triggered were fantastic. I heard, “That’s not fair!” At another table a student indignantly said, “That’s ridiculous, I’ve read it and I don’t remember that being in it.”

My students checked out new books (many from the display) and enjoyed some quiet time in the library reading those books that somebody didn’t want them to read.

What better way to encourage students to read than to tell them that someone doesn’t want them to?